We use cookies. By using this website you consent to their use.
OK
FAST DELIVERY
BUYER PROTECTION
PRIVACY
Order status
‹ Return to search results │ Home  >  Summer tyres  >  145 / 80 13  >  ...  >  Continental Conti.eContact 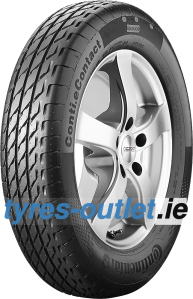 We only supply the tyre. If there is a rim shown in the picture, it is for display purposes only.

European Production
For questions or concerns please contact us at reifen-outlet​@delti.com

You drive more miles per volt, we enjoy less emissions per mile

For electric vehicles in compact class

Reduced rolling resistance for highest mileage.
The Conti.eContact features a completely new design. In addition to a larger outer and rim diameter, which allows the same load capacity with reduced tyre width, it has an optimized sidewall flexing zone with less material, optimized tread depth and rigid ribs, as well as a flat contour. Through the resulting flexible sidewall area and reduced tread movement, the tyre offers optimized rolling resistance for highest mileage.

For hybrid vehicles in luxury and mid-sized class

High technology made with craftsmanship

Reduced rolling resistance, excellent handling and safety thanks to the Green Chilli compound.
Continental’s Green Chilli compound reduces the internal friction of the particles and polymers, thus also reducing rolling resistance. This has resulted in the Conti.eContact receiving the EU label grade A for fuel efficiency. In addition, special grip additives lead to improved grip and stable handling. Thanks to its reduced rolling resistance, the Conti.eContact has received the top mark for fuel efficiency. In addition, it boasts improved grip and stable handling.

The European Union, under CE 1222/2009, has mandated that all tyres manufactured after the date of July 1 2012 for cars and commercial vehicles include standard EU Tyre Labels classifying them by three performance characteristics:fuel efficiency classified from A to G,wet grip classified from A to G, and noise emission in decibels.

Categories of tyres unaffected by this regulation include: retreaded tyres, professional off-road tyres, racing/sports car tyres, as well as certain types of tyres designed to improve traction such as studded tyres, T-type temporary spare tyres, tyres for cars built before 1990, tyres with a maximum allowed speed of 80km/h, tyres for rims with a diameter less or equal to 254 mm or greater or equal to 635 mm.
This label is intended on one hand to promote economic and ecological efficiency in traffic, as well as increase road safety, and on the other hand to help consumers select appropriate tyres by ensuring a certain degree of product transparency.

Nevertheless, the label has been criticized for only showing a very limited number of characteristics. Professionals argue that tyres have many more features that are important and relevant to road safety, including but not limited to aquaplaning properties, driving stability, service life, product properties on wet and dry roads other than wet grip, properties on snow.
Tyre manufacturers suggest that the test results from various institutions and industry magazines should remain a very important source of information for the end consumer, because they focus on and rate a wide variety of tyre properties and features.